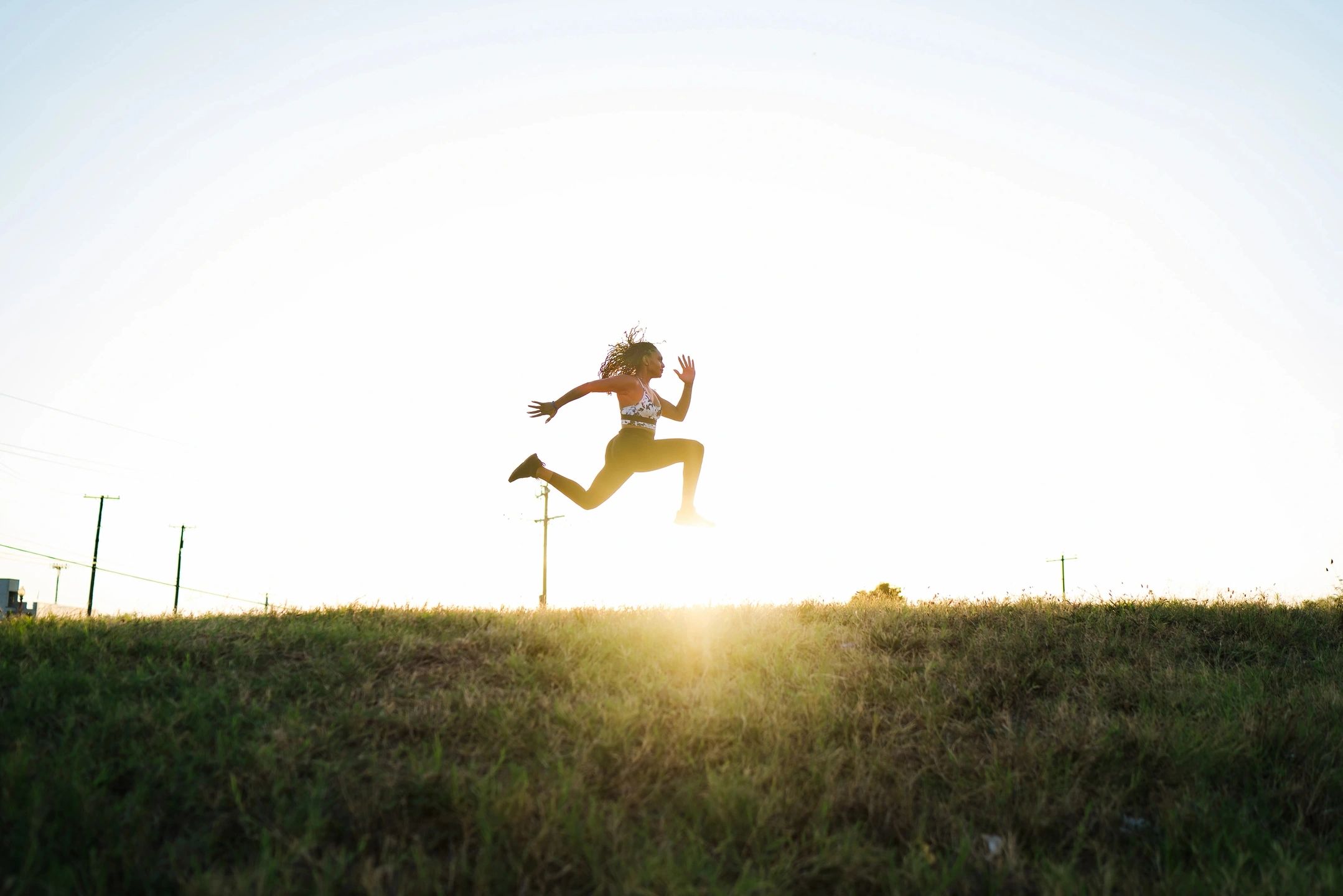 This is how you should run 100% of the time. New personal record guaranteed.

There are essentially only 3 actual factors to monitor to decrease your risk of injury while running: be symmetrical, don’t collapse too much, don’t overdo it.

Seriously, comb through running research and injury prevention. A lot of what is being sold to prevent injury or improve performance is not worth your money.

Take a look at any high level race. What you’ll see is there is no ideal running form – you will see runners of all different forms at the highest level of the sport, including overpronators!

So let’s go through these 3 factors first. Next post, we’ll go over cues for performance, but for now, this post is on injury prevention.

We’ll start with symmetry – the most obvious factor. Your goal is to run, or if you’re working with someone, help them run, symmetrically on each side. This means having relatively the same amount of foot/ankle, knee, hip, and trunk motion. It’s generally easy to spot, especially when you watch someone run from all angles. If you’re by yourself, you can use film yourself from behind, in front, left, and right (on a treadmill is easiest). Correcting asymmetry ranges from very easy (a simple cue) to very hard or impossible (if there’s a structural difference on one side). But generally, the target should be the ankle or the hip, since those are usually the source of asymmetry and the rest of the leg just follows suit. If you’re analyzing yourself and notice an asymmetry and it doesn’t correct with a simple cue on your part, it will be much easier and faster to consult an expert (physical therapist, running coach) than trying to figure it out yourself.

Next, collapsing. Collapsing refers to segments of your leg, not to your whole body. If your entire body collapses when running, you should stop running. And probably go consult a medical expert ASAP. Collapse will mostly happen at 3 points in your leg. The foot/ankle (pronation), the knee (flexion), and the hip (hip drop). Collapse is generally a good thing – it allows your body to absorb shock and then spring back to propel you forward. If you try running stiffly, you’ll feel the shock going through your body with every step. However, collapsing too far is also a problem as this loads the body more to absorb the impact and then requires more energy to reverse the movement. Ideally you want each segment to collapse like a spring – it compresses a little bit and then jumps back into place, requiring no additionally energy.

Overpronation (collapse at the ankle) is demonized in running, but there’s actually nothing wrong with it. In fact, it might even be slightly protective of injury – a finding that only emerged from analyzing a lot of data on a lot of runners. So there are only 2 movement patterns that I am aware of that actually have a sizable amount of evidence that would indicate they are related to pain.

The first is too much knee flexion or bouncing up and down too much when running. Going too far down not only wastes energy (because running is a horizontal motion, not a vertical one) but also puts a lot of strain on the knee. While it would seem like the best advice would be to tell someone to bounce less, better advice is actually to increase your cadence. Cadence is how many steps you take per minute. Taking fewer steps generally means you’re in contact with the ground longer, likely from dipping down more instead of just springing forward. Increasing your cadence means less ground contact time, less dipping down, and less pressure on the knees. Usually increasing cadence by 5% is helpful with this and can be done using a metronome app. Just calculate their cadence in steps/min and then set the metronome to that tempo.

The second movement pattern is a cross-over gait pattern. This is when one foot crosses over the middle. If you were to trace how wide foot placement is when running, it would look like they’re running on a line. This is normal. Abnormal is when one foot frequently crosses that line. Some people will notice that the heel of one foot frequently scuffs their other leg. Interestingly, this problem is generally due to the leg that is not crossing over, but rather the one that is on the ground. What’s happening is that the stance leg’s hip is ‘dropping’ – meaning it is collapsing so that the pelvis doesn’t stay level, but instead drops down on the swing leg’s side. The causes the swing leg to cross the midline, and places a large stretch and load on the outside part of the leg where the IT band is located. Often the IT band is blamed for this pain, though it’s much more likely it’s due to irritation of the nerve in that exact same region called the lateral femoral cutaneous nerve. Either way, strengthening and cues should target the stance leg and keeping the pelvis more level.

And finally, don’t overdo it. This one is also pretty obvious. If you go from running 1 mile, 3 times/week to running 3 miles, 3 times/week – there’s nothing special to developing pain here, you’ve just overloaded your body. This can be prevented by gradually increasing your volume. If you have a race or event in the future, just plan accordingly and give yourself plenty of time to ramp up the volume. If you did overdo, you’ll start by taking some time off. You can get back into running based on how long you had to take off.